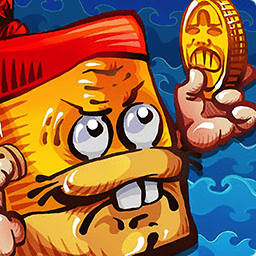 Mysterious Treasures is an interesting humor style puzzle. Beware of the Pirate’s Curse while pursuing gold coins on the mysterious Caribbean island!

– The object of the game is to collect as many “HAPPY” coins as possible while at the same time trying to avoid collecting “CURSED” coins.

– Each player must click on a square that has coins on it.

– The player controls the chip when it is green.

– You must move the chip only horizontally.

– The red opponent must move the chip only vertically.

– The Red Ghost has taken control of his mind on one turn.

– The Ghost has four levels of difficulty.

– The game comes to an end when either player cannot successfully move the chip onto a square that has coins on it.

– If you collect more “CURSED” coins, you will lose the ship.

– 8 achievements waiting for you to reach.

3D Beat Them All – Dragon fist with tiger guts